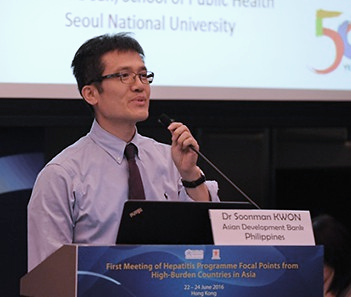 Professor and Former Dean of the School of Public Health,

Prof Kwon is a health economist and has worked over 30 years on UHC, health finance, and health systems & policy. He has held visiting positions at the Harvard School of Public Health, London School of Economics, University of Toronto, University of Tokyo, Peking University, and University of Bremen. He was the Chief of the Health Sector Group in the Asian Development Bank (ADB) in 2016-2017. He is the founding director of the WHO Collaborating Centre for Health System and Financing at Seoul National University. He received the Excellence in Education award of Seoul National University in 2020.

He has been a member of board or advisory committees of Health Systems Global (HSG), WHO Alliance for Health Policy and Systems Research, GAVI (Global Alliance for Vaccine and Immunization), and WHO Centre for Health and Development. He has occasionally been a short-term consultant of WHO, World Bank, and GIZ for health system and financing in Algeria, Armenia, Bhutan, Cambodia, China, Egypt, Ethiopia, Fiji, Ghana, India, Indonesia, Kazakhstan, Kenya, Lao PDR, Malaysia, Maldives, Mongolia, Myanmar, Nepal, Oman, Pakistan, Philippines, South Africa, Tanzania, Uganda, Uzbekistan, and Vietnam.